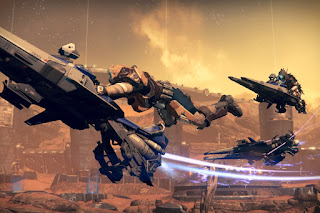 I know we never spoke about the Red Bull Destiny promotion, but there is a Red Bull promotion that deals with Destiny.

The promotion gives you access to an exclusive quest and an item called Focused Light that grants you 1 hour of double XP (Max number is 100) which is very usable with The Taken King bringing the new XP based level system with it.

So, we already knew/know how the focused light will work, but we never heard word about the exclusive quest.

I had my thoughts (a strike in which  you fight a giant flying Red Bull can at the end) but Red Bull recently detailed the quest. No video unfortunately, but it looks like the new exclusive quest will have you doing something you have never done inside of Destiny. A racing/speed mechanic.