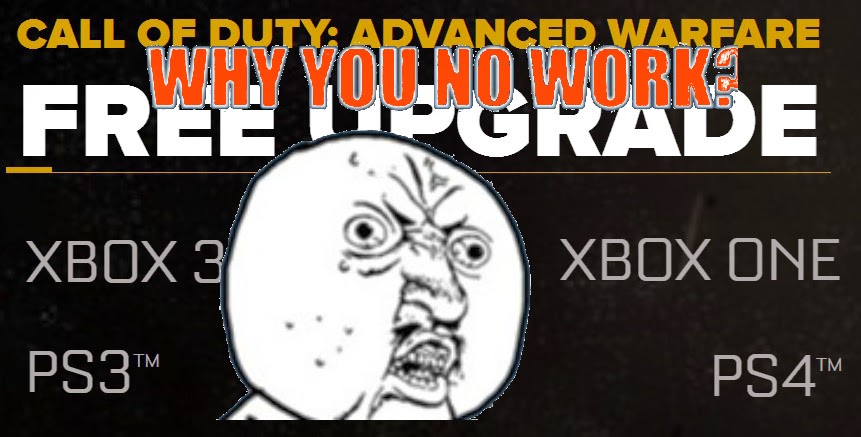 Remember that awesome deal I touted some time ago,  The one where you buy Advanced Warfare digitally on 360 and get the XBOX One digital version free?

Yeah, its not working.

I purposely bought the 360 digital relase just so I could get both on my Microsoft consoles for $60.

Going to the XBOX One store, I am presented with three different versions of Advanced Warfare. One being $59.99, another $99.99 and another as unavailable.

Reaching out to XBOX support for some answers . Will keep you all updated.

Update #1 - After reaching out to @XBOXSUPPORT twice, I am still being ignored. Worse part is it looks like I am not alone and there areothers not getting their free upgrade.

Update #2 - Twitter User @jenapher6, has been keeping me updated on her quest as well. She actually received a response from Activision support, which is pretty canned and says that they are aware of situation and working on it. At least its a reply. Still waiting....

Update #3 - Sony has put out a PSA about the issue, with some guidance to resolving issue,
Still no update from Microsoft or @XBOXSUPPORT.
Update #4 - The Advanced Warfare had finally shown up as free on XB1. You need to download the launch edition. Enjoy your 48gb install.
360 advanced warfare broke call of duty crap crash free upgrade junk one xbox