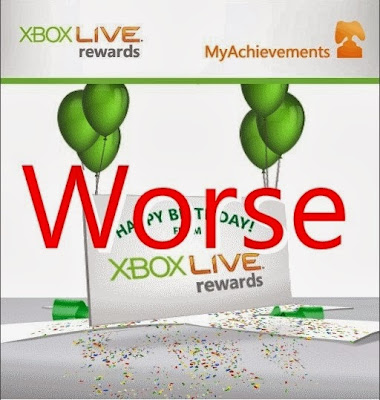 Last year when we saw what the birthday reward was from Xbox Live rewards, we laughed. 20 Microsoft points is useless, it can't get any worse, we thought.

After checking my email and being surprised again. Of course all excitement was gone this time, so the email read:


For one that's too much damn work for a tweet. Two, isn't a tweet the same as an email, both cold, digital and uncaring. Three, id rather just have the .25 cents monetary value (since MSP is no more) added to my account.

I can do nothing with a tweet, and here we thought 20 Microsoft points was terrible.

At least we still have Games are Old... I mean Games for Gold.