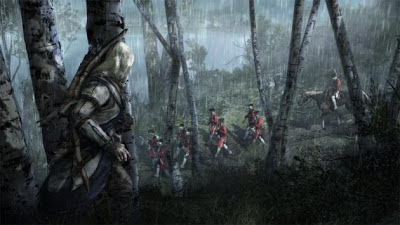 OK, so this game is long as hell to complete.

So far since my last report, ive managed to:

I dont have access to my Raptr right now so I cant tell you all how much time ive spent knocking this out, but its taking forever.

I actually uploaded the OST for AC3 on my HDD and have been playing it along with my gameplay and it helps quite a bit. It feels more complete now.

Ive also found some more bugs but no of those really effected me, except for when chasing the almanac pages and they were invisible so I didnt really know which way they went. Other than that, and a peddler displaying on map but nowhere to be found when I got there.

The Treasure Hunt missions were the most fun Ive found on these secondary missions. I like the whole get in get out concept of a few of the missions, especially when escaping the fort or sinking ship. Had my hands shaking from anxiety.

Ive also been doing the Homestead Missions which vary from annoying to downright stupid. Im an assassin why the hell should I have to rustle in pigs, or help a grown ass man pick up a chick? Its just tacked on bullshit, that could have been left out, but because this games annoying ass "Complete everything 100% and do everything" achievement, I am forced to do this crap.

And, whats with that Completionist achievement anyway? Why make it so freaking hard? I mean 100% everything? even the side missions I have to 100% sync, and do all secondary objectives for everything. How fucking annoying. Ive got to redo a huge part of the campaign, just because I didnt try to do secondary objectives the first play through cause they were so freaking annoying.

My goal is to knock out all the treasure chest tonight, and finish the Homestead Missions (as much as it kills me) then focus on the 100% sync everything.
ac3 PLAY REPORT unnecessary