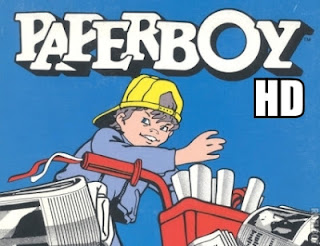 Its a running joke between my good friend Sean Sapp (@SeanRossSappMMA) and myself that Paperboy 2 is not only the rarest game ever released on any system, but also the best game ever created (neither of these points being true by a long shot) but after our Twitter conversation about the new XBOX One DRM policies getting scrapped, Sean tweeted this to me: 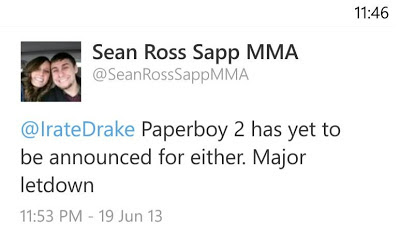 It got me thinking. What if Paperboy did get a remake for the next generation?

Back when Paperboy came to home consoles, times were simpler. Even the Paperboy himself was still realistic. A job you can imagine a young boy doing in his neighborhood during summer vacation from school, to earn cash to buy himself Nintendo games, the latest Ninja Turtle action figure, or pay his yearly subscription fee for Nintendo Power.

The enemies in the game have always been out in left field though. During his route the paperboy would encounter anything from guys rolling tires in the street, mummies, jack hammers and even haunted lawn mowers. Sounds like no only the most bad-ass neighborhood ever, but also the most dangerous.

But I'm getting off topic. If Paperboy was to get a remake today, what would it be like?

In my opinion the Paperboy during today's times would have much more to avoid in his frantic neighborhood. First would be employment. Considering we now live in the digital age, everything even newspapers (or any news at that point) we get from the Internet. I don't want to offend anyone out there by saying paperboys are no longer in existence, but I rarely hear of them anymore.

So whats Paperboy HD exactly? What info am I imagining?

Set out on your bike in this First Person adventure as the paperboy. Your goal is to not only gain employment but make newspapers important again. Using the power of the Internet, as the Paperboy you can now hack into government agencies and reveal exclusive news in your issues.

You have gotten your exclusive news article and printed? Time to deliver that shit. Set out on your Huffy, which now has specialization upgrades you can add to it including Sleight of Hand for throwing those papers super fast and Last Delivery, which allows you to throw one last paper before dying (Make it count!).  These upgrades are unlocked by levelling up paperboy or by purchasing them in the microtransactions hub.

The enemies are also getting a reboot, you will no longer be avoiding mummies or jackhammers. You will now have to avoid child predators, who are out on the prowl for someone just like you. Also new to the game are Cell Phone Users. Walking down the street, face into their phones they will never see you coming, or you knowing exactly where they will swerve next. All while avoiding such things as Domestic disturbances, rapist, homeless, drug cartels, gang wars and federal agents.

Exhausted yet? Get some sleep young paperboy, and tomorrow wake up and do it all again.

The game also has online mode, where you can battle for high scores, all while the enemies are controlled by other online players. Preorder now from Gamestop and receive your Terrorist enemy character exclusively for multiplayer.
from the brain of imagination paperboy hd ps4 remake wiiu xbox 180