The Beast has been Slayed- FIFA 06: RTFWC 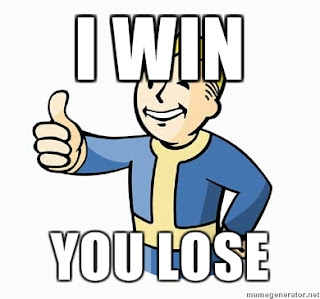 It may not seem much like an accomplishment to most, but to me its a completion that's haunted me for awhile.

Having a supposed "EASY" uncompleted on my card always looked bad. Ever since Eric completed way back when he would purposely bring it up from time. Our conversations would go something like this:

ME: Hey I completed Halo Reach on Legendary Solo, super excited about it.

So after my rant yesterday about this game, I decided to looks at the controls, thinking I had to be missing something. Well I was quite a bit, the left trigger puts your team and yourself into an attack like mode when trying to score so that they would go after goals.  I also learned that the reason my kicks sucked was because I was holding sprint while shooting, causing a hop kick that would only go a few feet.

This all helped, but it still wasn't easy. I had to quite out to the dash a couple 15- 20 times to avoid losing games, and restart the match. I also played a custom tourney that didn't unlock any achievements because I didn't change a setting for the type.

5 years later and this scar has finally healed.

I'm glad this is done, now I can mail it back to Achievement Hounds and focus on other games I need to complete.

Any thoughts anyone? post up in the comments below with your suggestions.
06 COMPLETED FIFA Finally RTFWC