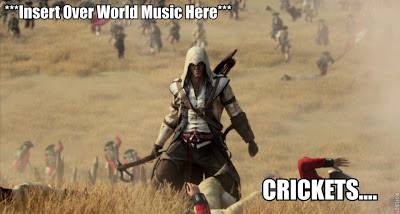 I decided to go ahead and continue with Assassins Creed 3. I figured since I finished all the other entries I might as well tie this one up also. So I spent hours last night playing after my son went to bed.

After investing all those hours, all I unlocked was 2 achievements.

There is allot though I learned that would have helped me during the campaign. General Stores are a thing.
I don't know whether this is my own fault or if the developers just didn't make this emphasized allot. I was buying all my supplies from the horse and carriage vendors. Had no idea i could change outfits and upgrade weapons.

Last night I decided to complete all the liberation missions, and get all my assassins. Well in New York during the missions to unlock a new assassin, it acts as a tutorial that shows you what all you can actually do with your assassins. Lure people out, acts as a decoy convoy that would put you into restricted areas easily, and even set up ambush areas. All of this would have been great to know before I finished the story... Glad I found out that I could purchase maps for the collectibles also. That will come in handy now.

Along with playing the game, I found another thing I knew before but had forgot about. This game has major audio issues. After defeating a fort, you see a bunch of soldiers kicking out British soldiers, all doing a cheering and animation, and you expect to hear cheers and claps or anything celebration related, instead you hear... silence. Nothing, no cheers, no boos, no farts, nothing just see the animation.

This isn't the only audio issue there is either. When speaking to characters the characters mouth and words are completely out of sync. I was talking to one character in a bar and his mouth didn't even move at all. There also is no over world music like in prior games. It sounds like there is suppose to be but it is also glitched. If you press start to go into the menus, then go back the music starts, and it feels normal, 30 seconds later it cuts out and your left with just sound effects.

This really annoys me since I love hearing ambiance music in the background, it makes the whole experience enjoyable. I guess I'm going to have to download the soundtracks to my HDD on my 360, and just play it during game play, cause at the moment it just pisses me off and makes everything boring.

There are something I like about the game though. The frontiersman's missions were neat. It craft lure and tales from the past or things old tales and puts you in an investigation to figure out the truth. It was neat listening to the stories about things like ghost and big foot then finding out the truth behind them.

Another thing I dislike though is how all my fellow assassins are pussies. I mean if I send them to another territory to complete missions and they don't have a 100% chance of completion, they will fail. I sent one of my high ranking ones in to a mission 3 times last night that had a 95% chance of completion and all 3 times failed.

So for anyone here who has finished this, can I upgrade armor like other games? can you upgrade your assassins load outs like other entries? Can satchels me upgraded so I can carry more equipment like bullets, darts, and stuff? I find it hard to believe that I can only carry small amount of ammunition and supplies, but can haul around tons of dead animal meat.