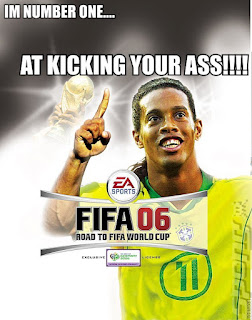 I officially hate soccer games. Ive never been a huge soccer fan, mind you, but I have played some of the more arcade like games, but never actually dived into the sport.

Well FIFA 06: RTFWC has officially killed me. Its my kryptonite.

I started the game back in 2008, and it kicked my ass then. Well 5 years later and things are no different. I think the reason its so difficult to me is because I don't have any idea what I'm doing. Soccer is as alien to me as reading kanji.

I'm playing the game on amateur at that. If I have the ball and I move into position to score, the ball is instantly stolen. So I tried putting a sniper scope on the ball and shooting it long range, which is a guaranteed miss every time. I have tried just standing there and still the ball gets taken.

I don't think I can compete this game. This is my incompletely it seems, the one unobtainable. Worst part is, its on the 5 hour completable list. Its a supposed easy game. Easy for those who like soccer games but World Cup Soccer and Mario Soccer never trained me for this experience.

American Football games are easy for me, I have an idea on what plays to run and how to avoid tackles, but nothing on this game seems to work. Passes intended to other teammates almost always go to the opponent, kicks from beyond the scoring area (the box area I call it) are always a miss, and even trying to avoid tackles causes me to lose the ball.

I dread going home because I know I'm going to play it tonight, I know ill try to complete it, and I know its going to piss me off.

I hate this fucking game!!!!