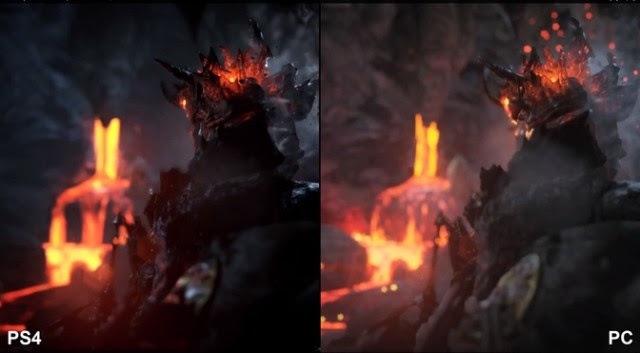 With the PS4 hardware in the hands of developers, we are starting to see how it really compares with top notch PCs.The latest Unreal Engine 4 demo gives us a chance to see a side-by-side of the two together.
While the PS4 looks good, it is alarming how much better the graphics for PC really are.

The real failure for the PS4 version is the lack of Global Illumination (GI). GI simulates realistic lighting and how the light bounces off objects and the scenery really gives it a feeling of reality.

The PS4 alone, is rumored to cost $400. So its unrealistic for it perform equally or better than an PC. Light particle effects and dynamic lighting take large of hardware to run, and the PS4 isn't built to handle them like high end machines. While the PS4 Dev tools are still in their infancy, games for the system will continue to look better and better.

Compare the release titles of the current gen, with the latest releases on each system. Given time developers will learn to squeeze every bit of performance out of the systems.

The PS4 isn't even released yet and already weaker than a high end PC, which is no shock here. That the console market as a whole. The next gen consoles wont pack as much power as a PC, but their price and simplicity will bring an abundant user base, like every console gen before.