DuckTales HD Remake brings my Childhood Back to Life 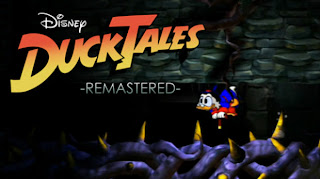 DuckTales, if you read the title or even heard mention of its name and didn't instinctively want to say "awoohoo" then you were clearly born after 1995 and/or never got to experience the greatness of DuckTales for the NES.

When I was a wee-lad I never had many NES games, they were costly and  my parents couldn't afford much. So instead my Dad would sometimes stop at Video Solution (our local video rental place) and would rent me a game for the night. I got to play alot of games this way, but never got to fully divulge in them. DuckTales was one of those titles. When I had it, it was great, the music, the platforming mechanics and everything else I can still remember from it. DuckTales and Chip and Dales Rescue Rangers for NES are probably still on the account as our most checkouts to date (Yes, place is still open).

So you can imagine the nostalgic rush I got when I heard Capcom was coming out with the HD remake coming to XBLA, PSN and the WiiU (all 4 of you out there).

The best part is it doesn't look like an over the top HD conversion. Everything still looks as classic as ever.

So when this finally releases it will be a day one purchase for me. I'm ready to enjoy the levels and mechanics I never got to as a child.
ducktales hd remake nostalgic psn remastered wiiu XBLA