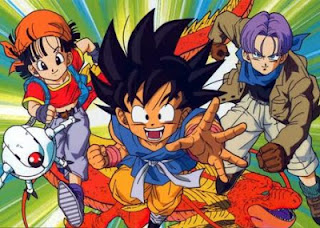 Back in the day, I use to be a big Dragonball Z fan.  I still remember getting home, finishing my homework up real quick (or not doing it at all) and finished watching the last few moments of Reboot, Then engaging in the newest episode of Dragonball Z.

It was kind of an awesome fad for most. Carrying around DBZ folders and trapper keepers, wearing DBZ shirts in the hauls and even making Kamehameha movements back and forth at each other. Yeah we were all in high school, but it was still pretty awesome, and played testament to our nerdiness. We were always talking about it (much like video games) it was a topic item and something easy to debate amongst each other.

Anyway, I'm getting carried away with yesteryear.  My DBZ days came to an end somewhere in my senior year. I don't know if it was because the series got so confusing to me after Majin Vegeta sacrificed himself to save earth and we were introduced to what felt like 5 different versions of Buu, a magic sword and fussing in and out with certain characters and everything becoming a big cluster fuck, or if i just grew up and decided girls were more important. Either way I never finished the Buu saga and like that my DBZ days were over.

Still reminiscing from time to time about the anime and with friends who still like to chat about it, I always wanted to watch Dragonball GT. Just to see where they took the series.  I remember when it was being announced on Cartoon Network, that they were going to start showing GT, but I never took the time to watch it and figured my chance was lost.

Well recently my friend Justin, a big anime fan himself, came over and we were talking about old DBZ. I told him how id like to go back and re-watch it and GT the one I never saw. He said that he had the entire collections on DVD and just wanted him out of his way (not a DB fan anymore) and said I could have them.
So I said "Hell Yeah!!!" and soon I possessed them all.

Last night while Windstream was sucking ass, and dropping my sons Bob the Builder every 5 seconds from Hulu, I decided why not he likes cartoons, lets have some father son time watching DBGT.

I'm looking forward to what the series does (I dont know much about it) and hoping it wont ruin DBZ for me. So here we go watching DBGT for the first time.
DBGT Dragonball GT OFFTOPIC Yesteryear