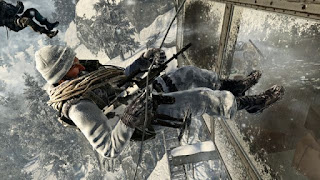 And to the surprise of no one, COD will be getting yet another installment this year. Activision has announced that they are planning for release fourth quarter of 2013.

In a statement released by Activision


“The Call of Duty franchise continues to set the bar for innovation and we expect the new Call of Duty game in development for 2013 to raise that bar even higher.”

“There is increased volatility this year due to the ongoing console transition, which makes predicting the future more challenging than during normal years in the cycle. For Call of Duty, consistent with our past practices, we are planning for the mainline release in Q4 to be down versus 2012.”

It looks like its going to be another entry into the Modern Warfare Franchise.

***Yawn*** I wasn't super impressed with BO2 even though i did enjoy the online (still enjoy COD online). But the campaign really let me down.

I just wanna know when they can start putting the years date at the end of these and battlefield/Medal of Honor games instead of actually titles.