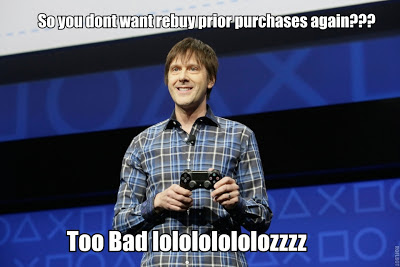 Alright Sony fans, now is the time to get pissed. The PS4 is getting backwards compatibility thanks to its Gaikai service, But all your current PSN purchases and saves will be gone with the wind on the next gen system.

SCEE exec Shuhei Yoshida while speaking to Engadget stated that your PSN purchases and saves will not make the transition to PS4, because of the architectural differences between the PS3 and PS4.

So you spent a butt ton of money on previous content that will be re-released on PS4 Gaikai service, be ready to shell out another butt ton of cash to buy back those previous purchases.