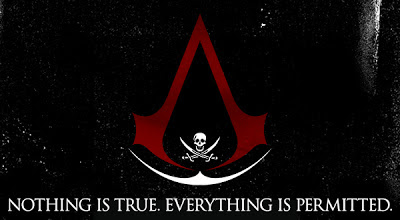 Yesterday, a few images leaked out to Kotaku, giving us a glimpse of what the next Assassin's Creed entry could bring us.

AC3 took place during the American Revolution and gave us a new protagonist Connor Kenway. From the images we have seen it looks like the next entry could be a prequel. 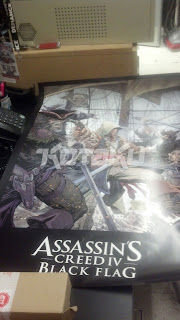 AC: Black Flag leaked poster shows an assassin amongst some swash-buckling pirates. On the back of the poster it was revealed that there is a map of the Caribbean and other locations like Jamaica, Cuba, and even Florida.

After some other detailed leaks, Black Flag, will put the player in control of Edward Kenway, Connors grandfather, who appears the be a very successful pirate in the 1700's.

More about Black Flag is suppose to be unveiled later today.

Personally, I'm excited. I visited the Caribbean last year and loved it, just imagining an assassin in that time period in those locations, just beautiful. I can see this entry bringing us all very lush environments and beautiful graphics for the next gen.