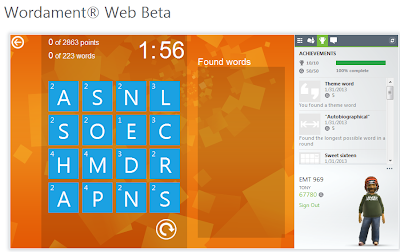 I like the thought of them doing this with games as it adds extra ways to get achievements for games.

Wordament is confirmed that the achievements stack.  Having already played this game on Windows 8 it was a quick 50 GS for me.  As well if you have already played the game on Windows 8 you don't have to worry about playing the 100 rounds again just like on the IOS release.  I hope to see alot more free games come to this platform with achievements but with lower prices on the paid games.

Let us know your feedback on what you think of this web beta that Xbox Live is doing.