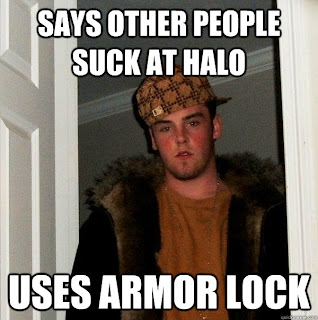 Excuse me for a moment here while I vent my extreme pleasure with 343 Industries and their choice to remove Armor Lock from Halo 4.

I just finished up listening to 343 Sparkast episode 016, where I heard the spectacular news that the team had decided to remove Armor Lock from the game. I applaud the team for this. In my honest opinion Armor Lock is not only one of the worst things to hit any multiplayer game since the Noob tubes were introduced in COD.

The typical player, I found, who whole heartily used armor lock in reach were noobs. I once encountered a whole team of armor lock users and talk about a aggravating experience. It was a saving grace to those players who weren't quite up to par with everyone else, and felt to me like "Well, we are aware that you suck, so use Armor Lock all the time, so that way when your getting your ass handed to you, use it and hopefully one of your teammates will help you out."

I rarely saw anyone use it in any other fashion. Just used it as a saving grace. Every time I encountered a player using armor lock it felt like shooting at someone with juggernaut or last stand perks in COD, lame.
I for one am beside myself with excitement for this announcement. Its one of the reasons I was cautiously excited for its multiplayer, but now that I know that it is gone, I can rest easy at night knowing no noobs are safe from sticky's, rockets, or vehicles, once again.