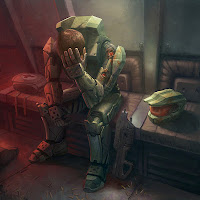 I'm a fan of Halo, many of you already know this. I enjoy every aspect of the Halo Universe from Arcadia to the Yucatan Peninsula, I even enjoyed the ODST spin-off. Reach has been the only game to leave a bad taste in my mouth.

So being such a big fan of the universe, and a yearning to learn more and more about the people and places that make up these worlds, I have spread out from just the games, and dove into the novels. Fall of Reach was the first one introduced to me and I've been into the novel series ever since. I just recently finished reading one of the two most recent releases in the universe. Halo Glasslands. 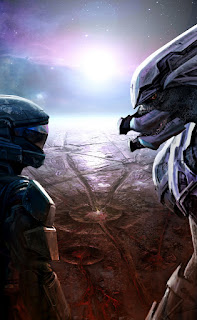 Glasslands picks up where Ghost of Onyx last left us. Halsey, Mendez and a group of SPARTAN-II's and SPARTAN-III's hurling through space, stranded in a Shield world created by the Forerunners and sealed in a slip space bubble. The book also details the creation of Kilo-Five team. Assembled by ONI Intelligence Director Margaret Parangosky, who is assigned to conduct black ops missions to create disdain and instability in the Sangheili (Elites) species at all cost, and also with orders to seek and arrest Dr. Halsey once found.

The story dives deep into the emotional and moral decisions of the SPARTAN program, mainly the SPARTAN-II, which Halsey was lead on. It also addresses the Religious beliefs of the Sangheili and details of there culture are explored.

I enjoyed the story, but it also had moments that made me wanna put it down and walk away. My main issue was the way Halsey was criminalized and demonized for her decisions during the SPARTAN-II program. The other issue I had was the fighting, or the lack there of. But the book did manage to keep me wondering, and wanting to pursue the end of the story, and I was not disappointed in the end.

If your interested in picking this up it's definitely worth the investment, but I encourage you to read Ghost of Onyx first, so you can understand the characters, and the reason they have the emotions and issues they do. It's definitely worth plunging into.

In the end, the book finishes up on a cliff hanger (Halo 2 style) and I have already preordered Halo: The Thursday War, the sequel to this book, that isn't released until October 2nd. So Ill have to hold out till then to find out where Kilo-Five will go and how this all tie's into Halo 4.