Those who know me personally, know that I'm a bit of a hoarder of video game stuff. So many times I get stuff that I have no interest in or have already used.

So this year I decided to give back, I've lumped all my dlc codes together (most are for xbox 360) and will be shelling them out to you the readers for 25 days until christmas.

The items range from avatar gear (360), in game content, and even some (alot) of double xp for Modern Warfare 3.

Stay tuned, things will be posted at random on here and our twitter feed.

Look for things to pop up this afternoon. 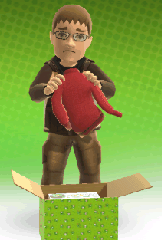